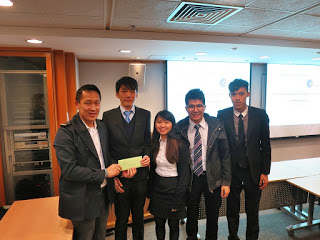 A team of four SEEM students won the First Runner-up in the 2016 HKSQ Company Based Student Project Competition organized by the Hong Kong Society for Quality (HKSQ). The purpose of the event is to provide an opportunity for students to work on an actual industrial case and propose solutions. This year, the competition was held at City University of Hong Kong on 12 Mar 2016.

The SEEM team worked on “Food Assembly Process Improvement” for the LSG Sky Chefs plants at Hong Kong International Airport. After a thorough analysis of data collected in January 2016, the SEEM team found different feasible solutions to improve both effectiveness and efficiency of their process.